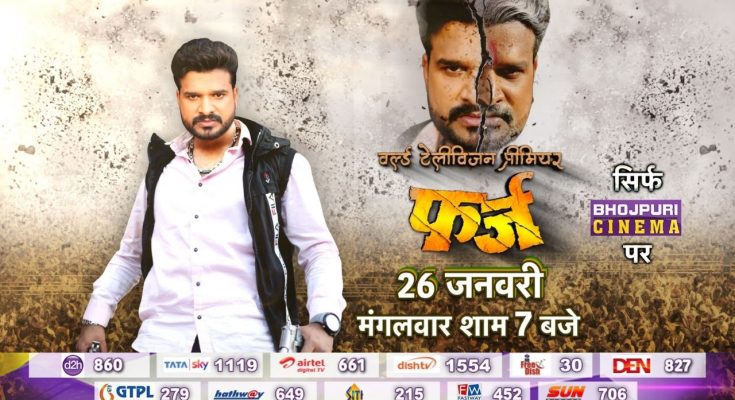 Mumbai 21st January 2021: On the occasion of Republic Day, Bhojpuri Cinema is all set to entertain their audiences with a full packed and romance movie with the World television premiere of Bhojiwood’s biggest hits ‘Farz’ on 26th January at 7 pm followed by repeat telecast on Wednesday, 27th January at 10 am.

Bhojpuri Actor and Singer Ritesh Pandey will be seen in a strong action avatar with Mani Bhattacharya, who is popular not only in Bhojiwood but also in Tollywood. The movie also features Umesh Singh, Baleshwar Singh, Jai Prakash Singh, Babita Singh, Ravi Tiwari in crucial roles.

Directed by Sanjay Srivastava and produced by Mohitendra Kumar, the story is about Krishna (Ritesh Pandey), who shares a deep bond with his grand-father Shivraj (Brijesh Tripathi). On his way to Bhimpur Village, Krishna confronts some goons and saves a girl (Mani Bhattacharya). The goon’s leader Rana (Umesh Singh) & Nageshwar (Baleshwar Sing) threaten her family for it. Later, Krishna learns a shocking truth from her grandfather Baldev that Rana is the slayer of his parents and he decides to take revenge on him. Now, how will Krishna deal with their enemies? ‘Farz’ is co-produced by Mehtab Hussain and the story is written by Vishwajit Kumar Singh.

Witness this enigma unfolding in the World Television Premieres of Farz on 26th January, at 7 pm only on your favourite entertainment channel, Bhojpuri Cinema!

Bhojpuri Cinema has been entertaining the Bhojpuri audiences with an exciting line-up of high quality, drama-filled entertainment. The 24-hour movie channel has constantly been winning the hearts of its viewers by showcasing the best of movies in the market.

The network currently boasts a total of eight distinct Free-to-Air channels under its bouquet, serving content across India in multiple languages. Apart from their flagship channel Enterr10 (Movies), it is under Singhal’s leadership that Enterr10 Television Network has become home to one of India’s most-watched Hindi GECs, Dangal TV.