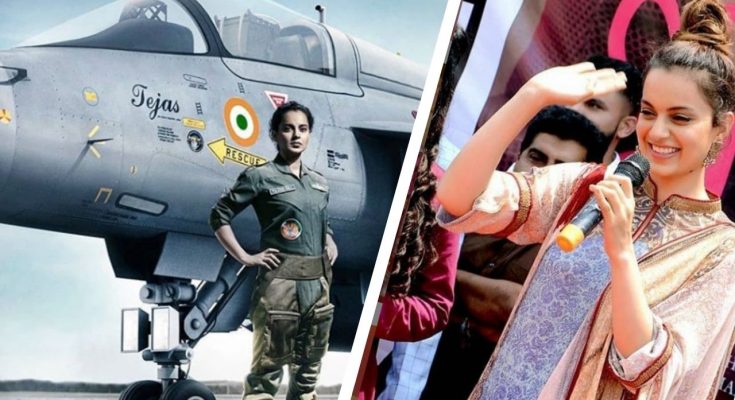 Kangana is very excited for her upcoming film Tejas, She will be seen in the lead role, Sarvesh Mewara is directing the film and Produced by ronnie screwvala.

Kangana shared a photo of the film Tejas from her Instagram account,
In which she is seen in the dress of a pilot standing near the Tejas jet aircraft.

She wrote while sharing the photo

“#Tejas to take-off this December! ✈️ Proud to be part of this exhilarating story that is an ode to our brave airforce pilots! Jai Hind”

Looking at the poster of the film, it seems that the story of the film will be based on the female pilot in the Indian Air Force, and And patriotism will also be seen in it.

#Tejas to take-off this December! ✈️ Proud to be part of this exhilarating story that is an ode to our brave airforce pilots! Jai Hind 🇮🇳 #FridaysWithRSVP @sarveshmewara #RonnieScrewvala @rsvpmovies @nonabains

A post shared by KangnaRanautBigFan (@kangnaranautbigfan) on Aug 28, 2020 at 2:02am PDT

Talking about Tejas aircraft, it is a fighter jet aircraft developed in India. Which is made by Hindustan Aeronautics Limited (HAL)

For all the brave hearted and strong headed women in Uniform who make sacrifices for our nation day in and day out …. Kangana to play an airforce pilot in her next , titled – #TEJAS . . #KanganaRanaut @team_kangana_ranaut #RonnieScrewvala @sarveshmewara @nonabains @rsvpmovies