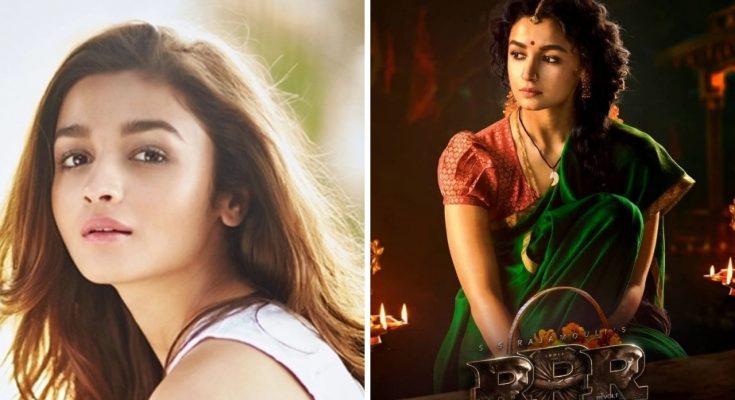 Alia Bhatt shared the first look of her upcoming film RRR on her birthday. Alia Bhatt plays Sita in the film. In the first look, Aaliya sits with the lamp around her and has a basket of flowers in front of her. Aaliyah is wearing a beautiful green color saree. She is seen sitting in the picture with a manga tikka and earrings.

Alia, sharing the picture with the caption, wrote, Sita is a black-hearted emoji and hashtag RR. The film marks Alia’s debut with SS Rajamouli and she stars NTR Jr. and Ram Charan. Also, SS Rajamouli on Monday shared Alia Bhatt’s first look as Sita from her film Rudram Ranam Rudhiram (RRR). The actress celebrated her birthday today. The director wrote, For Ramaraju, strong will and determination await Sita. Introducing Aaliyabhatta to all of you as Sita.

Alia will be seen opposite Ram Charan, who plays Ramaraju in the film. As soon as the actress shared the first photo as Sita on her social media platforms, her fans commented praising her character poster. One of Alia’s fans wrote, O my God so beautiful while another mentioned I can’t wait. Fans on Twitter wished Alia on her birthday and called her RRR look gorgeous. RRR will be Alia Bhatt’s first film in Telugu cinema. In which Ajay Devgan and NTR Jr also have important roles. Directed by SS Rajamouli, the film is set to hit the screens soon. Apart from RRR, Alia will also appear in the film Brahmastra alongside Ranbir Kapoor.