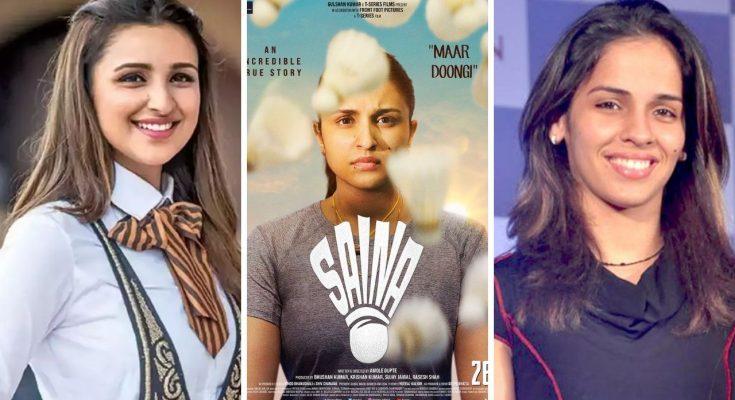 The teaser of the badminton player Saina Nehwal’s life was shared by the makers on social media. In this film based on Sport, Saina Nehwal plays Parineeti Chopra. Will be released on 26 March 2021. The film “Saina”, made under the banner of T-Series and Front Foot Pictures, is directed by Amol Gupte. After a long wait, the producer has shared the first look poster of Saina on social media.

Saina Nehwal is one of the most successful badminton players in the country and has won many awards. She was the first woman badminton player from India to win a bronze in women’s singles and an Olympic medal at the 2012 London Olympics. The film Saina will be the latest in a series of films based on Indian players. Sharing the poster of the film Saina, Nehwal wrote in his tweet, “I am very happy to share a lot of pictures of my upcoming film Saina, as well as written in theaters on 26 March.”

The film’s poster is seen running on the court carrying an Indian tricolor and has a wristband in the hands of the tricolor, and above it is a shutter in the hand that shows the name of the film Saina. Parineeti, who plays Nehwal underwent rigorous training for the film. The film, titled Saina, will feature Parineeti Chopra in the lead role, which is based on the character of the Olympic medalist. It has taken a long time to produce Saina Nehwal’s biopic.

Sharing a teaser of the film, Parineeti wrote Saina on March 26 in theaters. The teaser features Saina from a young enthusiast to a professional. Saina’s determination she says that no matter who is in front of me, I will kill. A brief glimpse of Parineeti as Saina is seen at the end of the 34-second teaser.