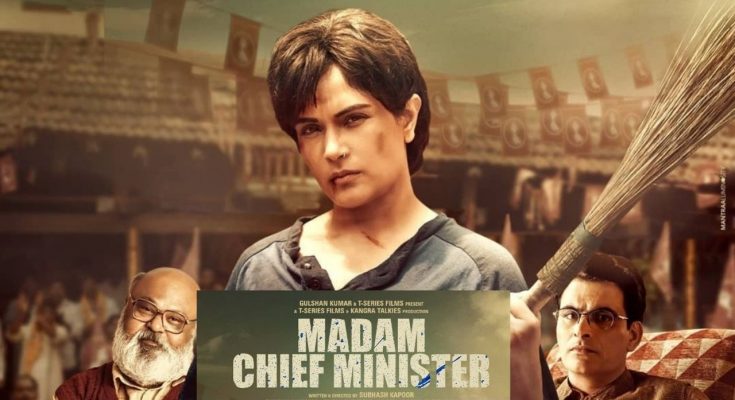 Richa Chadha shared the first look poster of her new film Madam Chief Minister on Social Media. Madam Chief Minister Written and directed by Subhash Kapoor, film is a vibrating political story. In which Manav Kaul and Saurabh Shukla will also be seen. The film will be released on 22 January 2021.

In the first look poster, Richa Chadha with short hair, bruises on her face and holding a broom in her hand. The tagline on the poster, which also features Manav Kaul and Saurabh Shukla.

Madam Chief Minister is the story of an untouchable

The story of this film is the story of an untouchable who makes it big in life.
Sharing the first look poster, Richa Chadha wrote: “Glad to present to all of you, my new film Madam Chief Minister is a political drama about an ‘untouchable’, who does a lot in life and makes it Bada Bana Banana will hit theaters on January 22.

The film is produced by T-Series Films and Kangra Talkies. T-Series has also shared the first look of the film on Twitter which is set in Uttar Pradesh. The poster depicts Chadha with the broom in his hand, with Kaul and Shukla as the tagline “untouchables, invincible”. Akshay Oberoi and Shubharajyoti also have important roles in Madam Chief Minister.