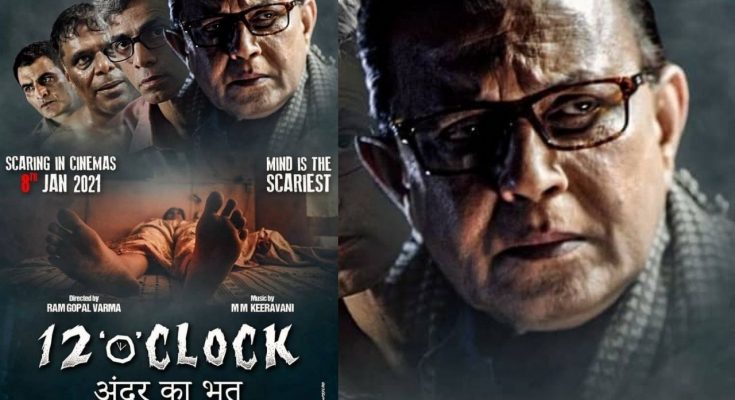 Titled 12 ‘O’ Clock, the film stars Mithun Chakraborty, Makarand Deshpande, Divya Jagdale, Manav Kaul, Ali Azgar, Ashish Vidyarthi, Dalip Tahil, Flip Saini and debutant Krishna Gautam. Psychological horror film Inner Ghost shared with the tagline. Ram Gopal Varma has tweeted the film director. After the climax, Naked and Coronavirus, my next film to be released in lockdown is a horror film called 12 ‘O’ Clock, it is not a short film, but it is completely a 1 hour 45 minute film.

12 ‘O’ Clock is an upcoming Indian-language horror film directed by Ram Gopal Varma and starring Mithun Chakraborty, Flora Saini, Manav Kaul, Krishna Gautam and Makarand Deshpande. The film was announced as Geher but the trailer with the new title was released on 3 July 2020. 12 ‘O’ Clock is an upcoming Hindi film set to release on 8 January 2021. The film stars Mithun Chakraborty, Makarand Deshpande, Manav Kaul and Ashish Vidyarthi in the lead roles.

Apart from making films in regional languages ​​like Telugu and Kannada Ram Gopal Varma, very few have been busy churning out films of late. His last Hindi film in 2017 was Sarkar 3. I always believed that horror works more on a psychological level because people get more scared when we stimulate their imagination. The horror genre always gets me excited and I have tried new techniques in this film to scare the audience, RGV, who has directed films like Raat Raat, Bhoot, Funk and Vastu Shastra. The music of the film will be composed by MM Keeravani. The music director MM Keeravani of ‘Baahubali’ fame has set the background of a horror film for the first time. The film’s cinematography was done by Amol Rathore. The film will soon be released on Ram Gopal Varma’s YouTube channel and OTT.