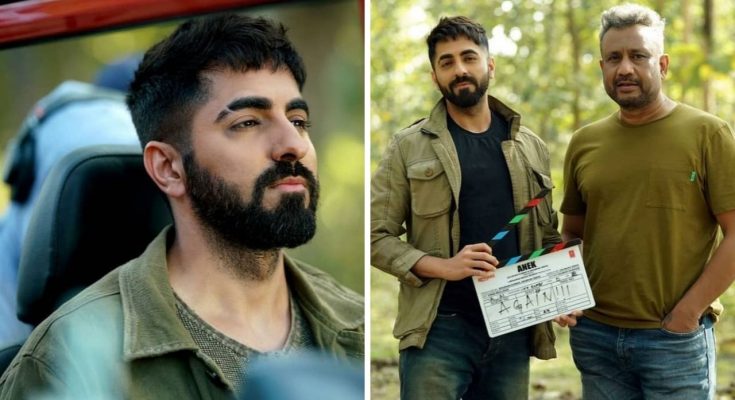 Actor Ayushmann Khurrana has shared some first look photos from his upcoming film Anek. The film is produced by Anubhav Sinha and is seen in a very different look to Ayushmann.
In the film, Ayushmann will be seen in a different style with a thick beard. Ayushman is seen posing in a red jeep in the pictures of First Look. He is wearing a green jacket and shirt and is seen with a thick beard and one eyebrow is slightly bent. In another picture, he was seen clutching the clapboard with Anubhav Sinha, which read, ‘Again’.

Ayushmann and Anubhav had earlier worked together in Article 15. Anubhav worked in the film as a director, which was highly praised and was a hit film. It was based on the caste division of India and a big city, high-caste soldier comes to rural Uttar Pradesh to explore the caste system to get a deeper look at the roots of the country. He sets out to solve a rape and murder case in the city while fighting against the corrupt judicial system and abuse of power. Ayushmann was last seen in Gulabo Sitabho opposite Amitabh Bachchan.

Ayushmann is currently shooting for Anek in Assam. Revealing his first look from the film, the actor had shared two pictures of his new look. Starring by the filmmaker, Anek is being bankrolled by Anubhav and Bhushan Kumar under Banaras Media Works and T Series. Meanwhile, apart from Anek, Ayushmann will next be seen in Abhishek Kapoor’s Chandigarh Kare Aashiqui. The actor will be seen sharing screen space with Vani Kapoor in the film for the first time.