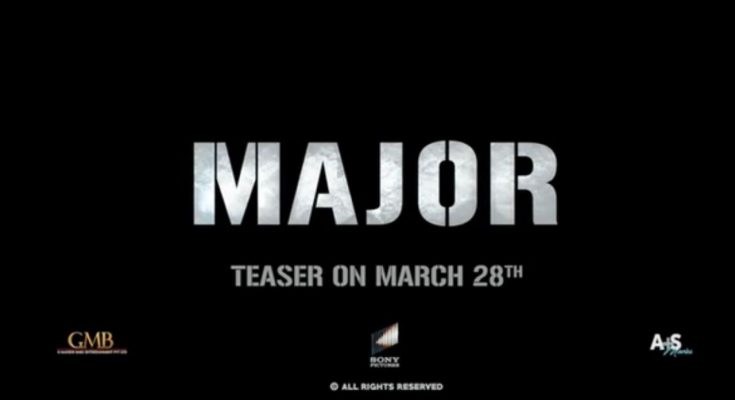 Directed by Shashi Kiran Tikka and produced by Sony Pictures Releasing International, Mahesh Babu Entertainment and AS Movies. The film was shot simultaneously in Telugu and Hindi, a film based on the life of Sandeep Unnikrishnan, the 2008 Mumbai attack martyr. Recently announced the major teaser release date.

Glimpses of the upcoming film Major, starring Adivi Sesh, were released on Monday on the occasion of the birth anniversary of Major Sandeep Unnikrishnan. The makers, with glimpses, announced that the teaser of the film would be shared on 28 March. Adivi Sesh has got fans excited about the film Major. The film, directed by Sashi Kiran Tikka with Major Glass Jhalak, he said, will be based on the real-life story of Major Sandeep Unnikrishnan, one of India’s most decorated military officers, who was martyred during the November 2008 Mumbai attacks.

Mahesh Babu shared the post on his social media page and wrote, remembering our nation’s Anang Naik, Major Sandeep Unnikrishnan on his birth anniversary. Here is a glimpse from the film Major. Major TeaserOne March 28. As well as celebrating his way of life and courage, Adivi Sesh said that we all remember him for his heroic sacrifice and bravery in the 26/11 attacks, but not many know how he has lived his life until then. Led. The Major celebrated his way of living, not just his sacrifice. As a son, a friend and a soldier remembering him on his birthday, I wanted to celebrate him and his ethos.

The shooting of the film Major began in February 2020. Shobhita Dhulipala and Saei Manjrekar have been cast as female leads. Mr. Charan Pakala has signed on to make music. Releasing on 2 July 2021, the film is produced by actor Mahesh Babu under his banner Mahesh Babu Entertainment. This is GMB Entertainment’s fourth production venture after Srimanthudu, Brahmotsavam and Sarillu Nikevaru. The film also stars Prakash Raj, Revathi and Murali Sharma.