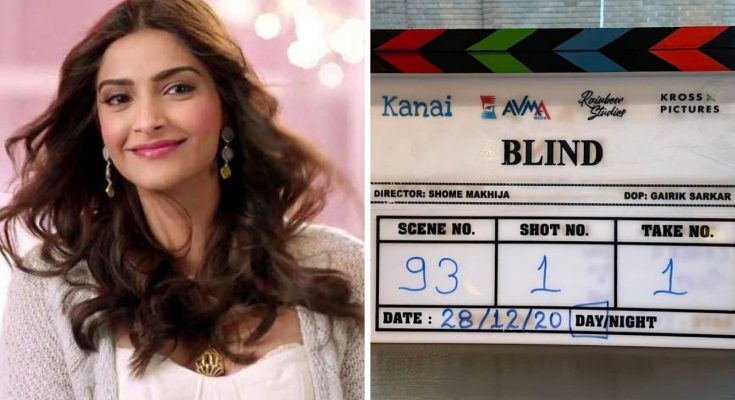 Sonam Kapoor has signed the film Blind and Sonam has reached Glasgow for the shooting of the film Blind. Sonam Kapoor will be seen playing a blind police officer to search for a serial killer in Blind. One who loses sight after a motor vehicle accident, seeks to fully develop his various senses, This allows him to assist the police in the ongoing investigation.

The film Blind will be released in 2021

The film is a Hindi remake of a Korean film of the same name. The film will be directed by shome makhija and produced by Sujoy Ghosh, Avishek Ghosh and Manisha W, Pinkesh Nahar and Sachin Nahar as well as Hyunwo Thomas Kim. Probably the film will be released in 2021.

The cast also includes actors Vinay Pathak, Purab Kohli and Lillete Dubey. Sonam Kapoor has a cameo in the recently released Netflix film AK vs AK and is seen playing a different style herself. Sonam Kapoor was last seen in the film The Zoya Factor released in 2019. shome will debut with Blind as director of shome makhija who has previously worked as an assistant in films like Badla, Kahaani 2, Teen Aur Main, Main Aur Main. Sonam Kapoor Ahuja likes to do films with her roles and starts the film only when she is convinced. In this film too, Sonam Kapoor will excite all her fans with her new style.