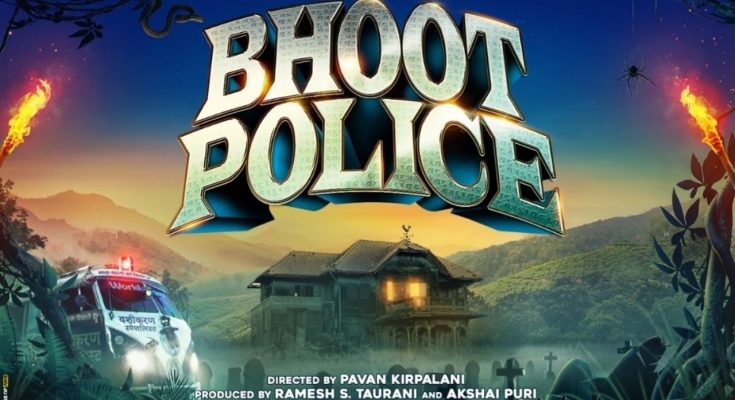 November 4, 2020, Shooting of the horror-comedy film Bhoot Police, directed by Pawan Kripalani, has been started by the star cast, the film is being shot in Dalhousie and Palampur in Himachal Pradesh. Bhoot Police film director Pawan Kripalani has produced thriller films like Phobia and Ragini MMS. film critic taran adarsh ​​shared information about his instagram, he wrote…

Tips Industries Limited, in association with Twelfth Street Entertainment presents ‘Bhoot Police’, directed by Pawan Kirpalani and produced by Ramesh Taurani, is a film co-produced by Akshay Puri and Jaya Taurani. Also while going to the shoot, Yami Gautam posted a picture on Twitter in which the lead actors are seen posing in front of a jet. And this poster showed a spectacular view of the mountainous region. The poster also depicts a scene of a dilapidated bungalow. The film also focuses on this bungalow which is in the middle of a cemetery and an ambulance in the yard of the bungalow and cemetery around which the mermaid stands. This poster is indeed a tricky one and now we will soon see the main cast of Saif Ali Khan, Jasleen Fernandez, Yami Gautam, Arjun Kapoor and others in a new avatar.

Saif Ali Khan, Arjun Kapoor, Jacqueline Fernandez and Yami Gautam are all playing the lead roles in this film.

Bhoot Police is a horror-comedy in which Saif Ali Khan, Arjun Kapoor, Jacqueline Fernandez and Yami Gautam are all playing the lead roles in this film.