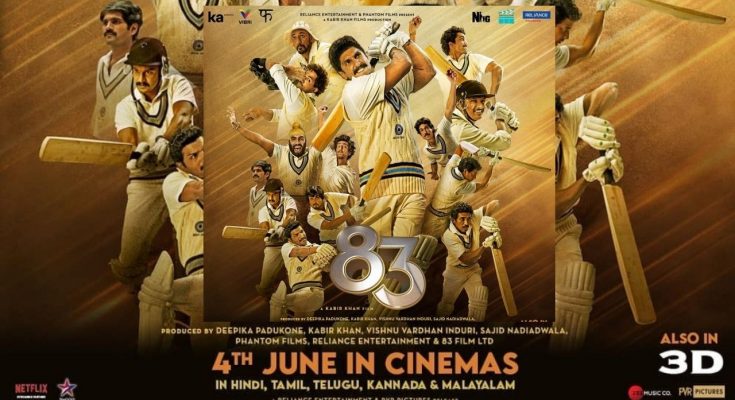 The film 83 based on the cricket game will be released in cinemas. The film is ready for release around 1 year but due to Corona, the theaters were closed. In such a situation, they had the option to release on the online platform, but the makers said that the film will be released in theaters. Because the joy of this film will come in the cinema.

Ranveer shared the information about the film’s release by sharing a poster on his Instagram on February 19 Friday evening. Also written, June 4, 2021 !! In Hindi, Tamil, Telugu, Kannada and Malayalam, theaters are available. Also, Taran Adarsh ​​has shared the information of the film by sharing a picture of the film on his Instagram profile. In this picture, a cricket team is shown which is fully ready for the game of cricket.

Ranveer Singh is playing the role of Kapil Dev

The film will see Ranveer Singh in the lead role of Kapil Dev. 83 is directed by Kabir Khan and a film which is to win Team India’s prestigious Cricket World Cup in 1983 and is one of the most awaited films. Ranveer Singh as Kapil Dev in 83 is all set to entertain the fans.

The film was scheduled to hit Big Screen in April 2020 but the epidemic extended the release date by a year. The makers of ’83 recently announced that the film will now hit theaters on June 4. Film 83 stars a team of actors Tahir Raj Bhasin, Saqib Saleem, Hardy Sandhu, Amy Virk, Jiva, Pankaj Tripathi, Boman Irani, Nishant Dahiya, Sahil Khattar and Amrita Puri. The film will also star Deepika Padukone as Ranveer’s wife. The film coincidentally will be the first onscreen film of 83 Ranveer Singh and Deepika Padukone after their wedding in 2018.

Produced by Reliance Entertainment and PVR Pictures, Directed by Kabir Khan. film 83 will be released in five languages ​​including Hindi, Tamil, Telugu, Kannada and Malayalam.
The Indian cricket team’s victory over the West Indies in their first World Cup final in 1983 is determined. The film depicts the journey of India’s prestigious World Cup victory and has been shot in many real locations including England.