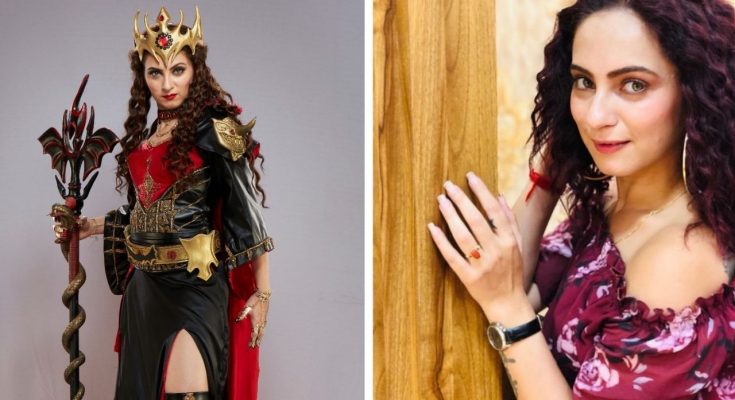 3 May 2021, Mumbai: After starting her career as a child artist, Lavina Tandon has been a part of the entertainment industry for over nineteen years now and has been a part of multiple period dramas and fantasy shows. In her new show, Nikki Aur Jadui Bubble that airs on Dangal TV, she is playing a witch for the first time and tells us about the challenges she faced while shooting in Jhanjharika’s costume.

Talking about the challenges actress Lavina Tandon says, “Jhankarika’s look was quite unique and challenging at the same time. The costume was not something we would usually wear. The corset top had wires on it which made the look heavy and challenging as I couldn’t even bend. The jewelry on my hands was attached. So sometimes it was difficult to work with it. But as they say, there is no gain until you have some pain. After doing a few period dramas and fantasy shows, I’m tired of wearing clothes larger than life. But during the initial discussions, I had asked the producers about the look and I was satisfied to know that the look is not for the entire show but only for certain episodes.”

She further adds, “The skirt has a nice slit, and boots with embroidery done on it. I was happy as I had to get acrylic nails done, though it was longer than the usual size as I was playing the witch. When I was playing Jhanjharika it was okay but for Lavina it was challenging. After a certain number of episodes, I got them cut shorter. In spite of all this, once I wear that costume, I’m in a very different world as it makes me feel powerful and full of attitude”

Lavina gives credit to the entire creative and styling team for creating this look for Jhanjharika. Once she is in that look, she feels like Angelina Jolie in Maleficent. The look for her is so classy and royal and still looks like a modern-day witch.