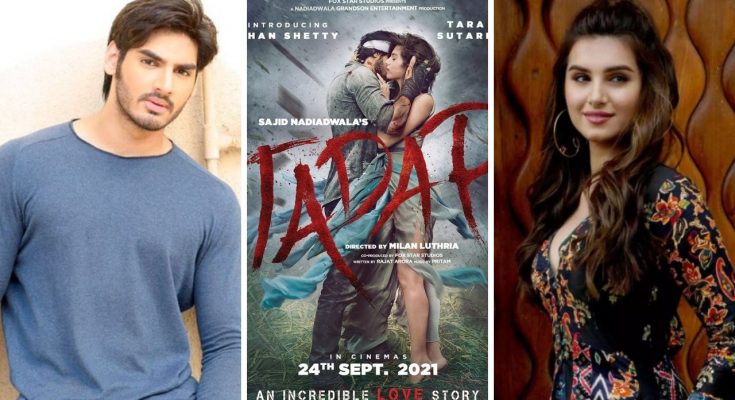 Son of Bollywood film star Sunil Shetty, “Ahaan” is all set to enter the film world. Ahaan’s first film is “Tadap”, in which he will be seen with “Tara Sutaria”. The film will be released on 24 September 2021.

Directed by Milan Luthria, the film will see a love story. Which is produced by Bollywood’s famous producer Sajid Nadiadwala. The music of the film has been composed by Pritam. Tadap is a love story written by Rajat Arora. The film is a Hindi remake of Ajay Bhupathi’s 2018 Telugu film RX100.

Bollywood star Salman Khan has also shared the poster of the film.

Sharing the poster on Instagram, Salman wrote, Ahaan wish you all the best an success can be all your hard work, discipline and dedication pay off. The pain of hard work should never die. The same Ajay Devgan also shared the yearning poster. Ahaan, writing this emotional word, has grown so quickly, heartfelt congratulations to Sunil Shetty for his debut film. Happy that he is in the capable hands of Sajid Nadiadwala and Milan Luthria.

Akshay Kumar shared the first poster of the film Tadap.

Poster of the film shows Ahaan hugging Tara Sutaria but her face is hidden. Sharing the poster, Akshay said that he still remembers seeing the poster of Sunil Shetty’s debut film Balwan and wrote that he is happy to present the poster of his friend’s son’s first film.

Also he wrote on Twitter, big day for you … I still remember your father, the poster of Sunil Shetty’s first film, Balwan and today I am showcasing you … Sajid Nadiadwala with so much joy and pride. Yearning to share the poster of Ahaan Shetty and Tara. Theatrical release on 24 September.

Tara Sutaria has also shared the poster of the film.

Tara Sutaria posted the first look poster of her upcoming film Tadap. Which will feature in Sunil Shetty’s son, Ahaan Shetty’s Bollywood debut. Sharing the same, he wrote, “Ye Pyaar Ke Tadap will now lead to the end … Experience the magic in the yearning of Sajid Nadiadwala – an incredible love story that will be released in theaters on 24 September 2021”.