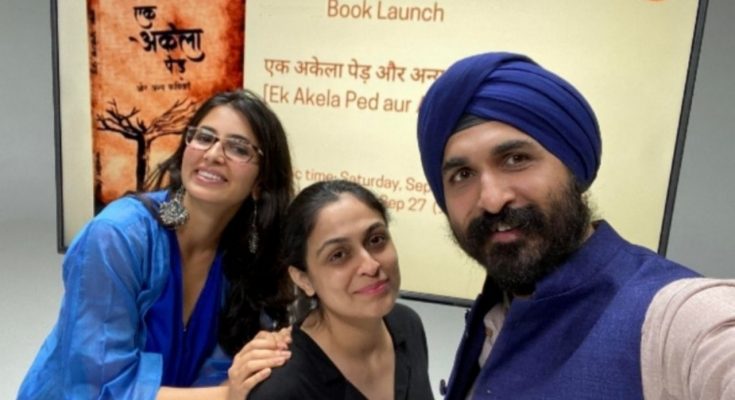 Actor, poet and writer Chanpreet Singh’s book “Ek Akela Ped”, a collection of 21 poems, was released in a function organized on Friday, 18th June 2021, in an office located on Yari Road, Andheri (West),Mumbai. The book was released in Mumbai after its launch in the US. Chanpreet Singh resides in California and regularly recites poetry at various events in the San Francisco Bay Area where his work has been appreciated by audiences of diverse backgrounds. He has acted in different plays and films in the US and India. The “Ek Akela Ped” is a 135-page book published by “Writers Gram Publication” in Hindi and is priced at Rs 225/-. The book is available on all major e-commerce websites including Amazon.

The virtues of life have been illustrated lucidly and uniquely with the poems in “Ek Akela Ped” (a lonely tree). The poems describe the entire spectrum of life. In Singh’s poems, one gets sensitized to topics like nationalism, human boundaries, unity, brotherhood, women empowerment and the meaning of life. The poems from the collection that stand out are “Ek Akela Ped”, “Batwara”, “Hath”, “Kshamata Se Jung” and” Akhri Dum”.

The book begins with the title poem “Ek Akela Ped” in which a lonely tree reminisces its happy days. The poem describes how the destruction by the human beings and climate change led to the abandonment of this tree and is left fighting for its survival.

In the poem “Batwara” the poet deals with the division of the country on religious lines. The poem describes bloody encounters between the Hindu and Muslims during the partition of the country in 1947. Singh says that in a united India the Hindus and Muslims used to celebrate festivals together and share sweets. The poem seeks to give a message of introspection in the global and national context.

In the poem “Hath”, Singh describes how to face the challenges of life through own life experiences. He describes the difficulties he faced as a poet and despite the obstacles, he emerged victoriously. The presentation of own life through the medium of the poem has been done in a way that the readers can relate to it and bring transformation in their lives.

In “Akhri Dum”, the poet wonders whether we will be able to fulfil our expectations. Or do we continue to crave for more? Whether our final moments will be peaceful or filled with feelings of guilt? This is an unsolved puzzle that raises unusual questions.

All should read the book “Ek Akela Ped”. The simplicity of the poems touches our heart and teaches us how to lead a simple life. The book also contains some pictures drawn by Chanpreet Singh, which add flavour to the poems.

At the start of the book, Singh notes that “as much as skill and hard work contribute to success, so do self-confidence. The surrounding environment, such as family, friends, and close relatives, can strengthen your confidence by boosting your spirit or can weaken your self-belief by discouragement. Perhaps this is why the choice of company is considered extremely important. I have been very lucky in this respect. I started this collection of poems about two years ago. Since then, my family and close friends have constantly encouraged me, for whom I am deeply grateful. The book began during a rehearsal of a play in which I played a leading role. In the book, I have included twenty-one poems, related prose, and illustrations. My aim is not to preach. I only speak my voice while having the pleasures of poetry. I have thoroughly enjoyed writing these poems. I hope you enjoy reading them as well,” says Chanpreet Singh.

Chanpreet Singh has acted in the movie “Sounds of Silence”, which is a PTC Punjabi Project. He has played the lead character of plays like “Rumours”, “Rashomon”, “The Parting”, “State of Daniel and Rodes” and “Muaavaje”. He has been associated with theater groups, including the Naatak theater group, Enacte Arts Inc and BAD Company. Chanpreet works as a senior executive at a reputed consulting firm and is active on various social media platforms.